THE BEACHES OF HYDRA 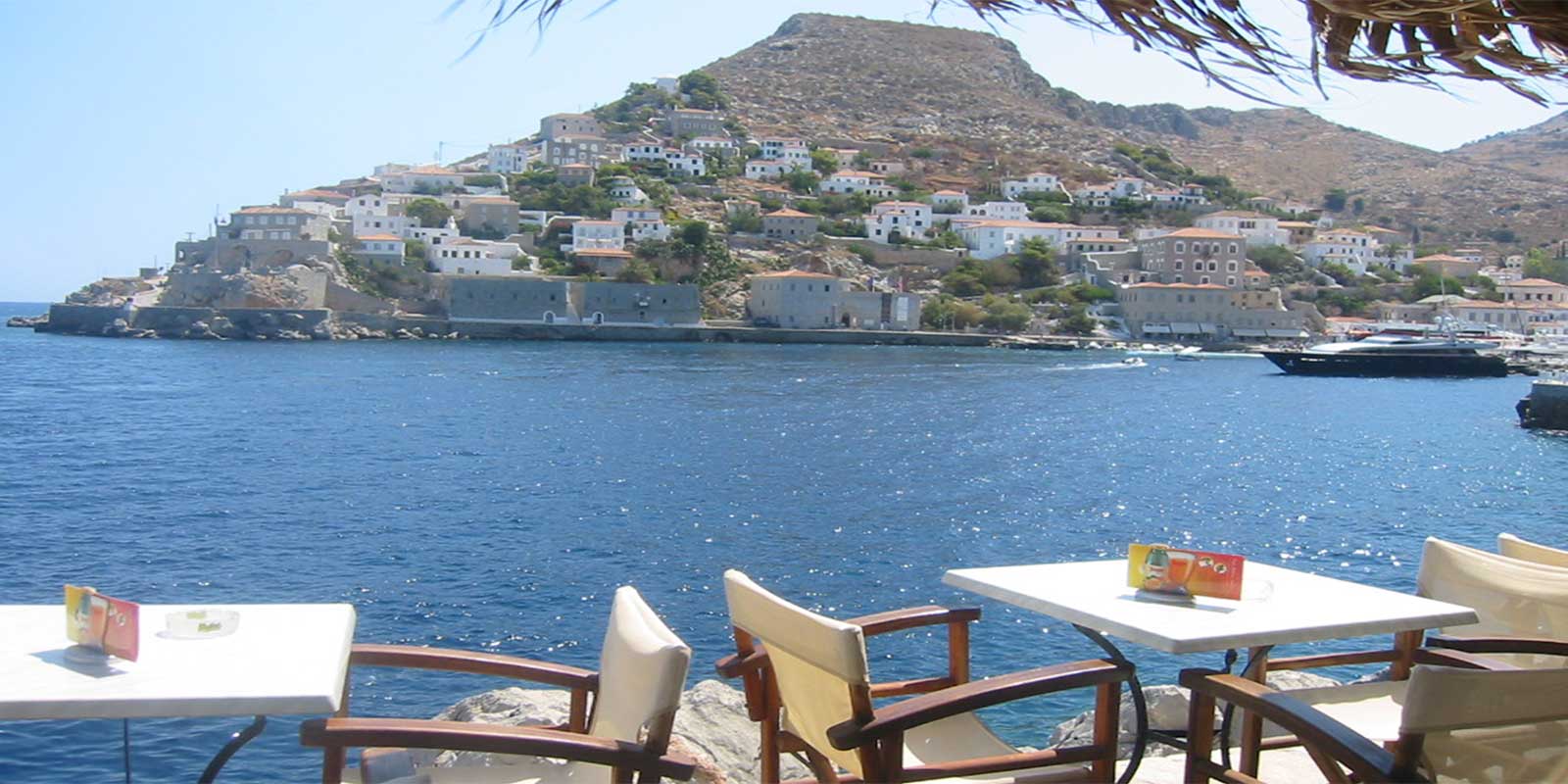 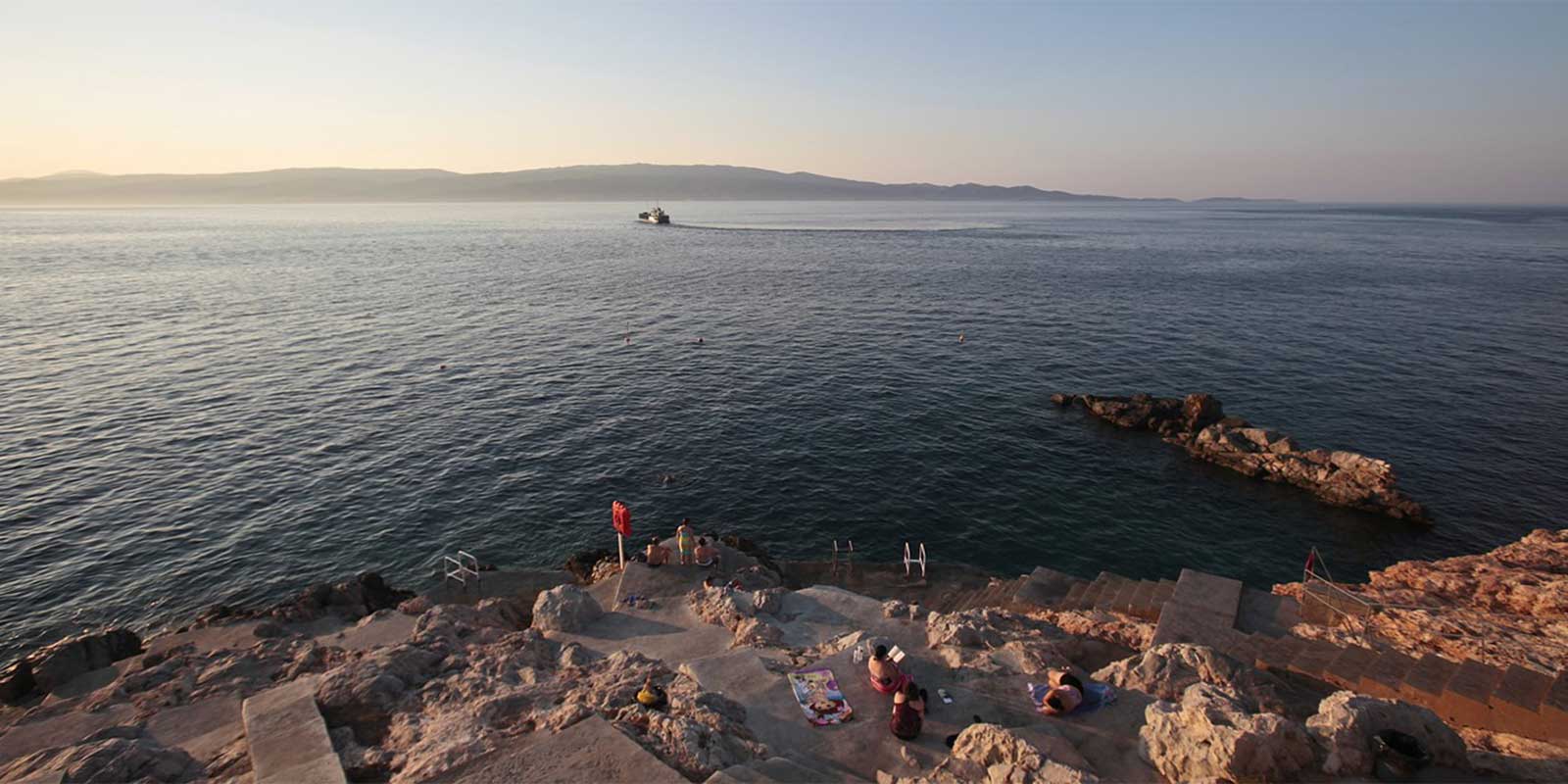 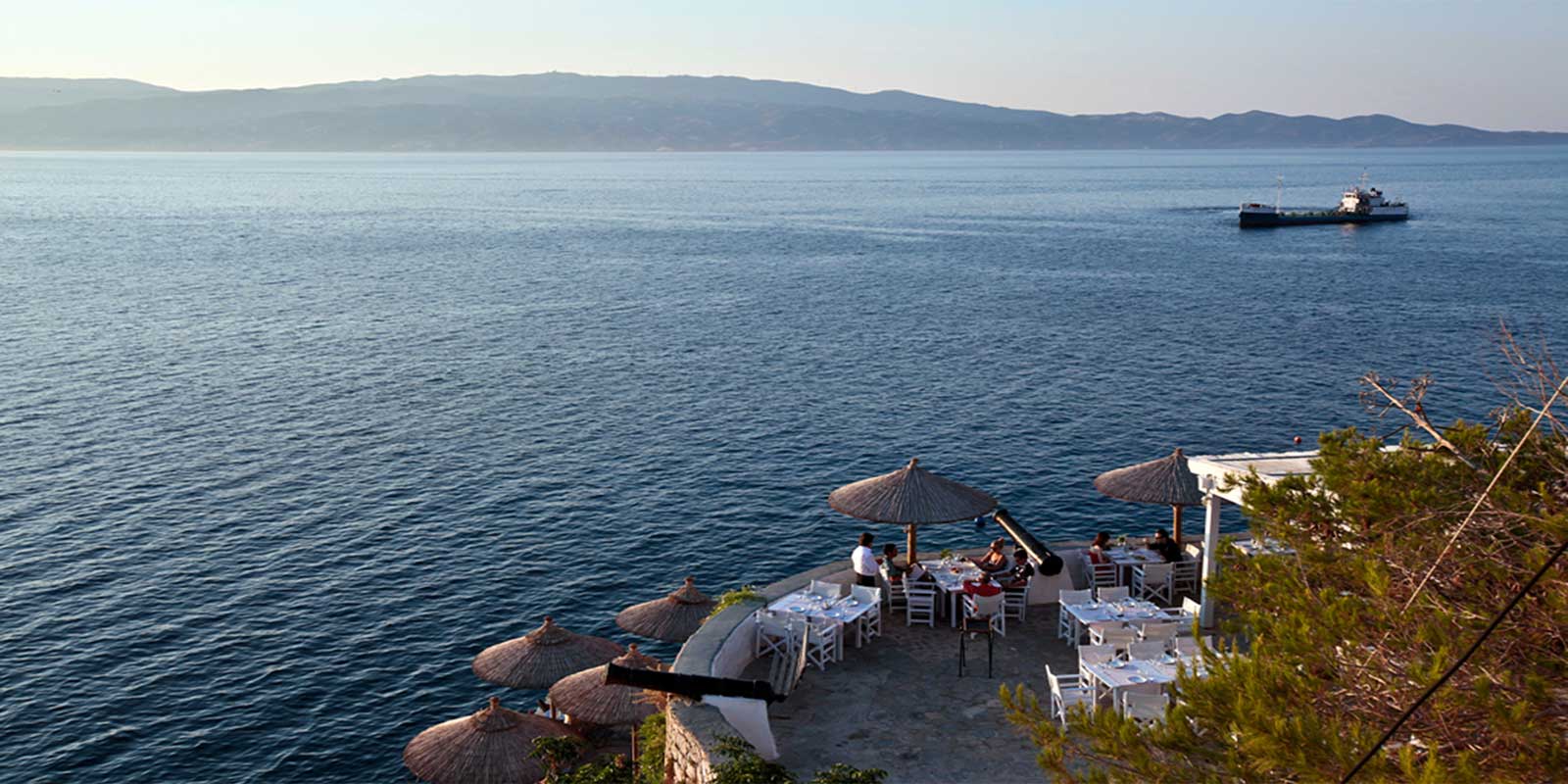 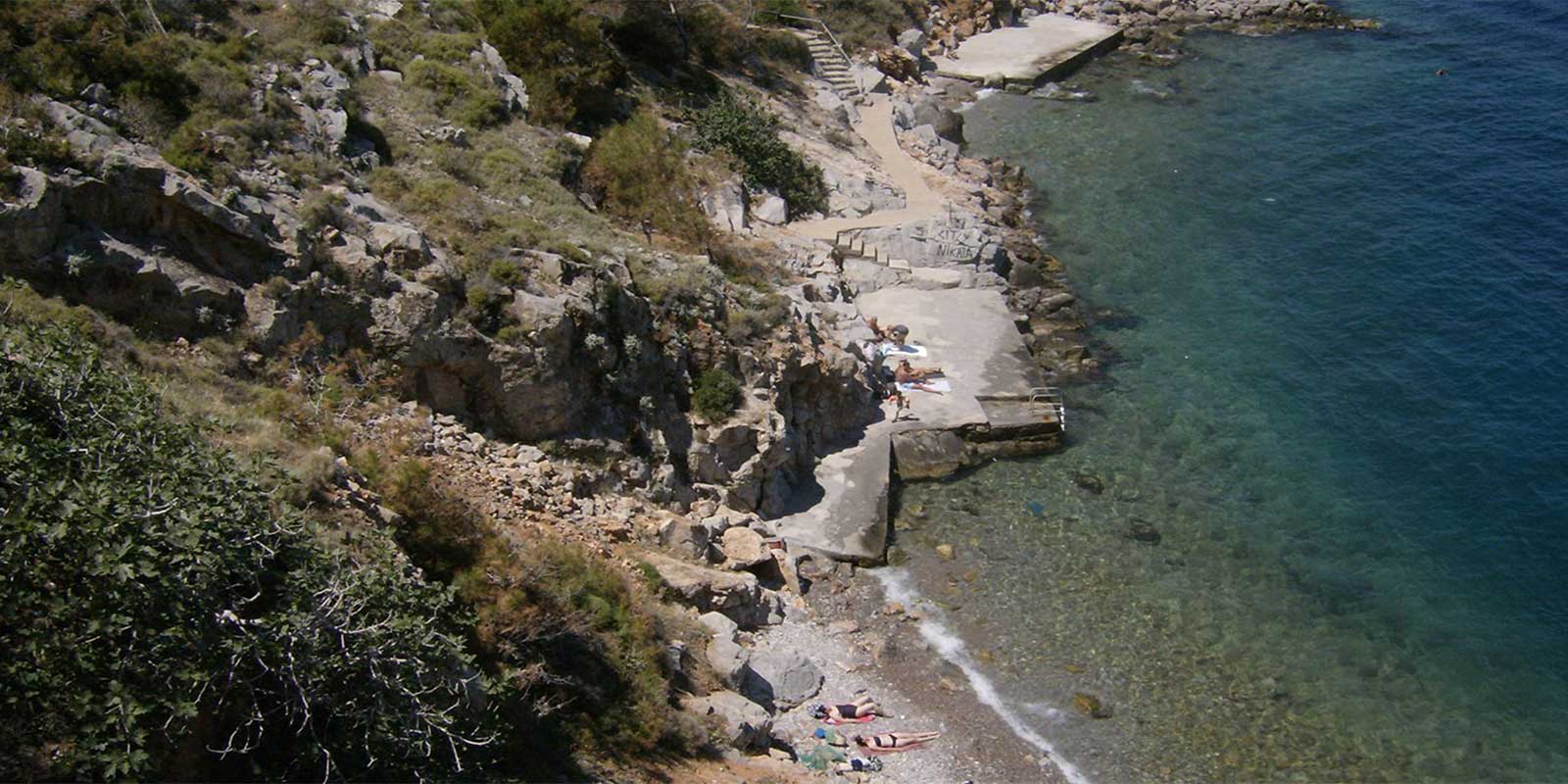 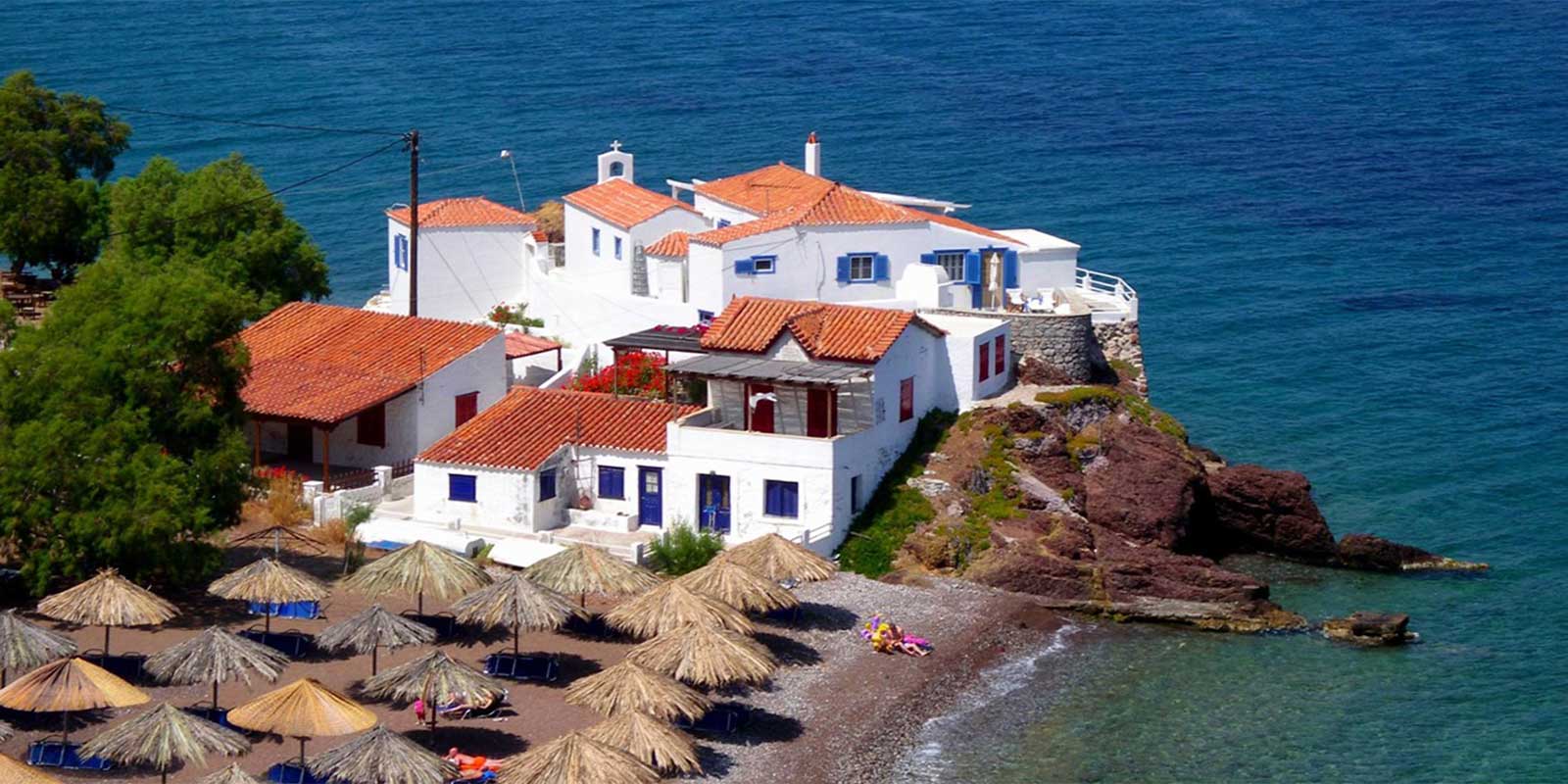 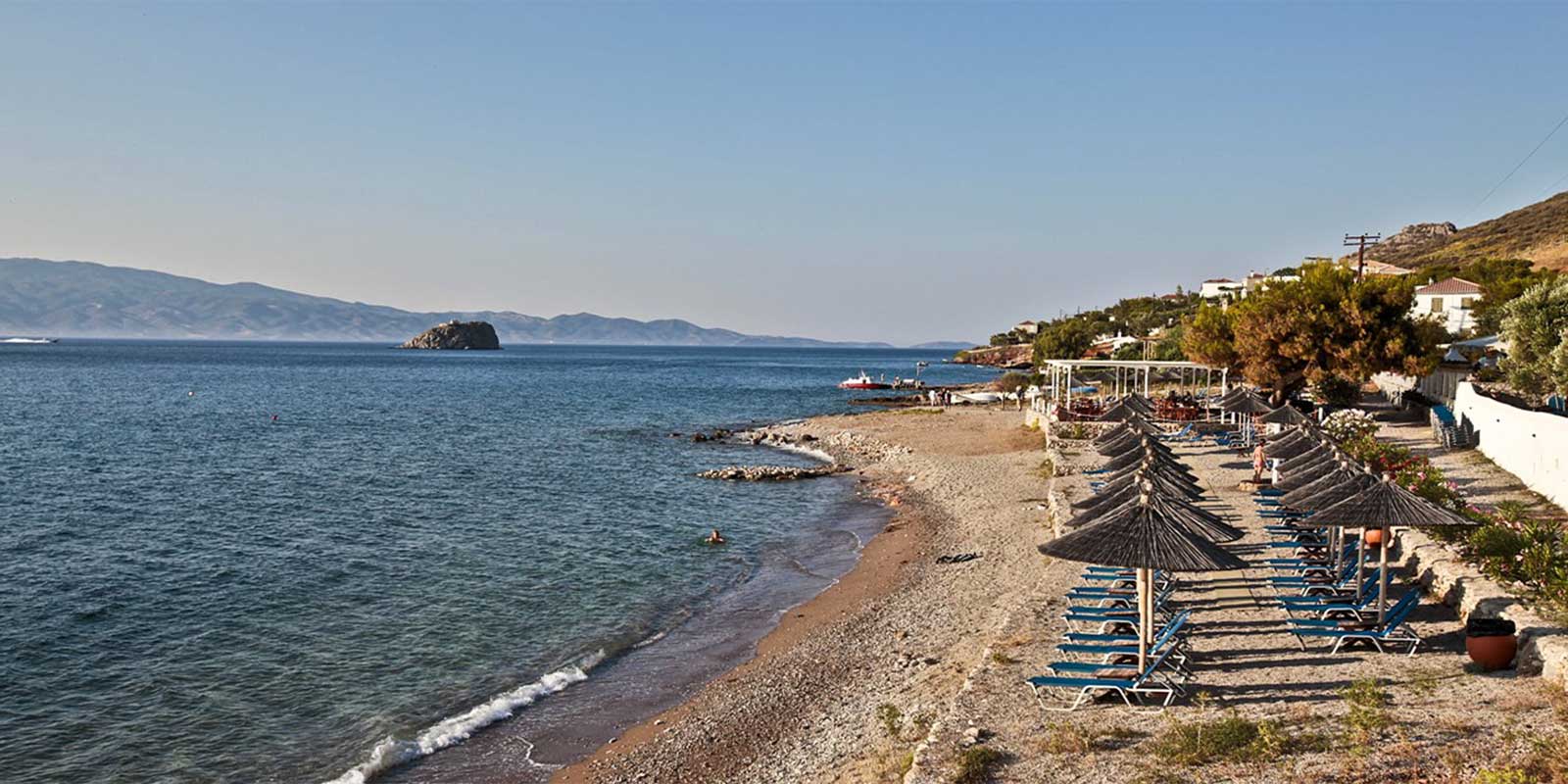 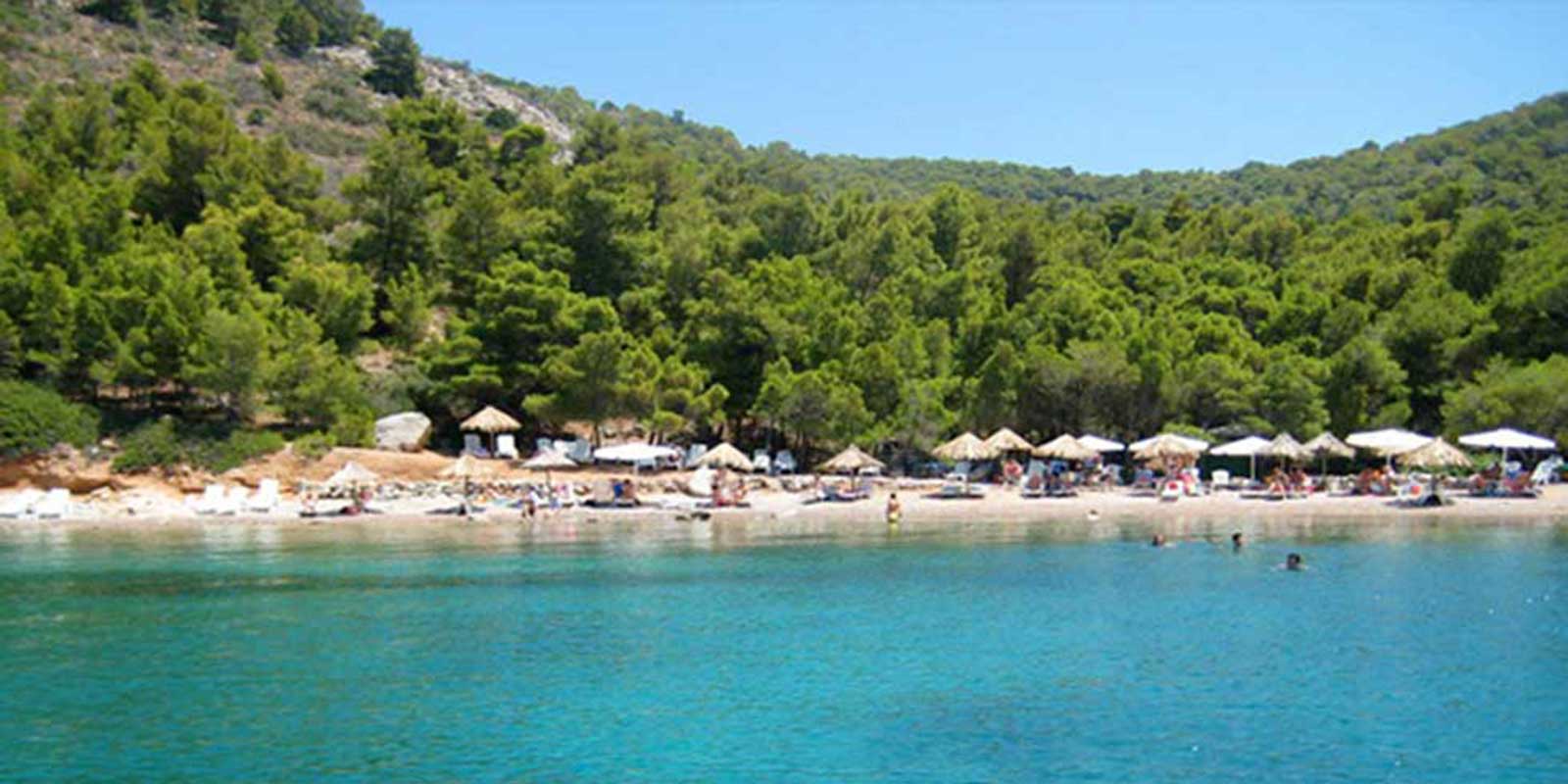 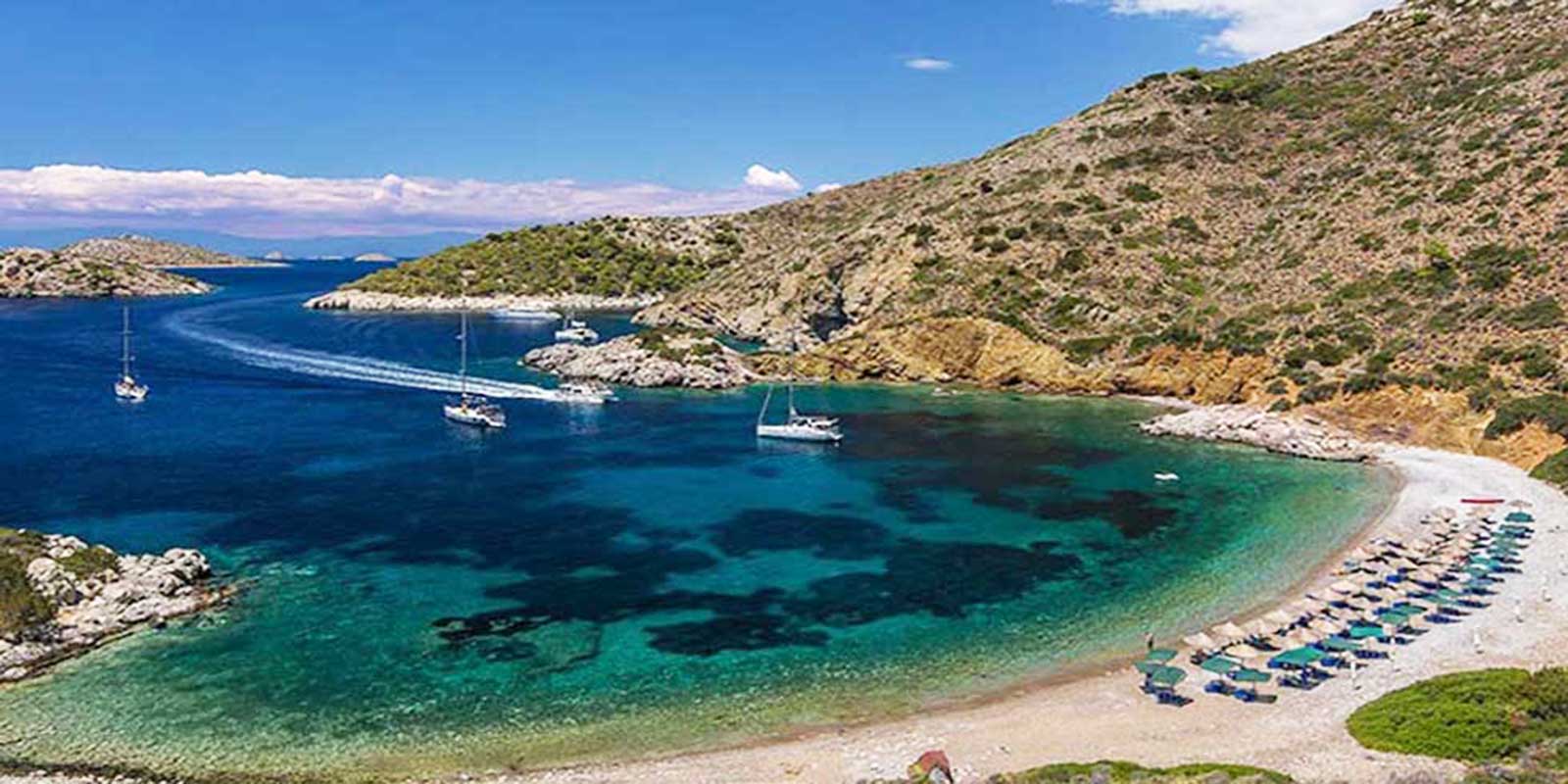 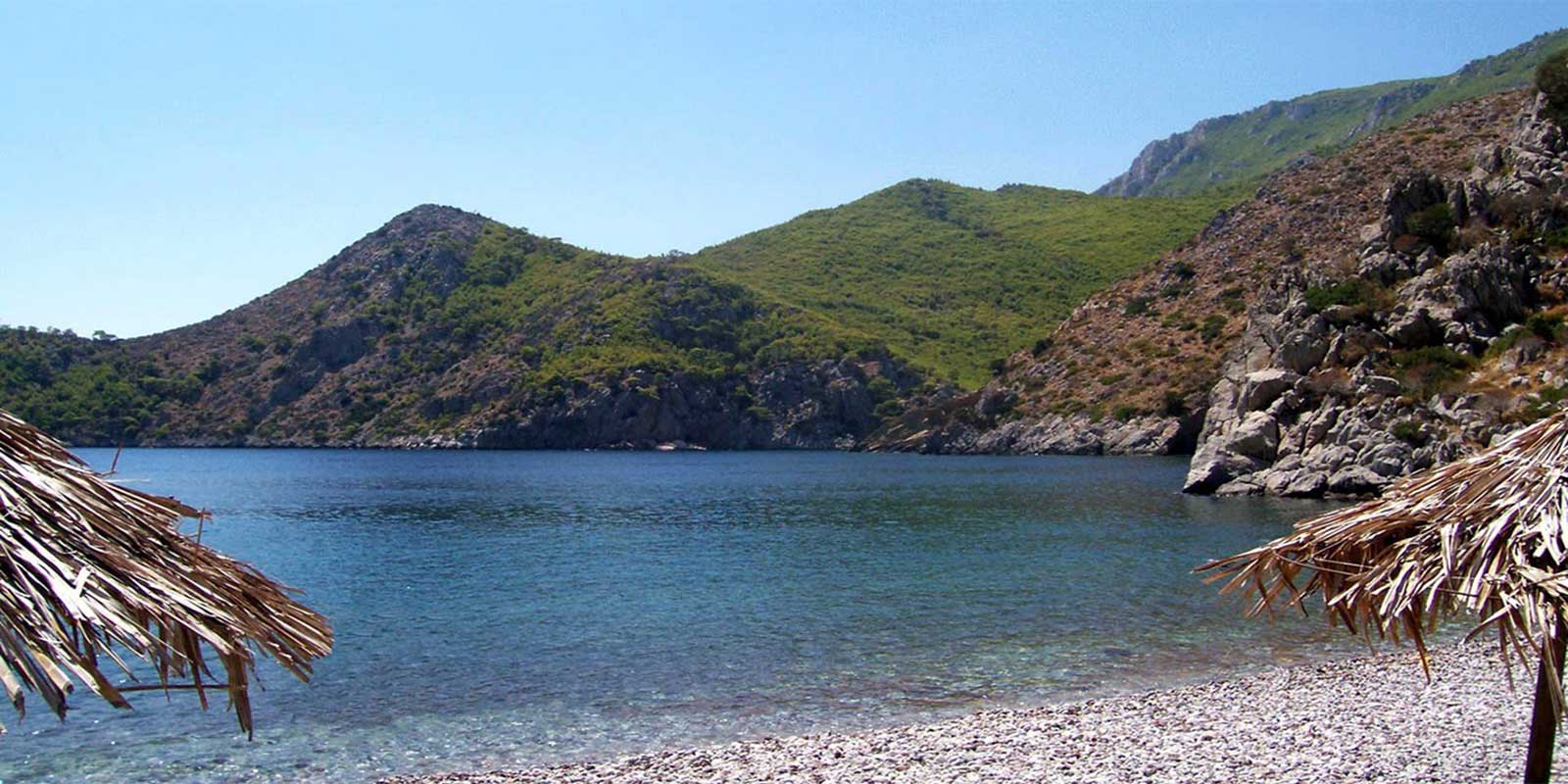 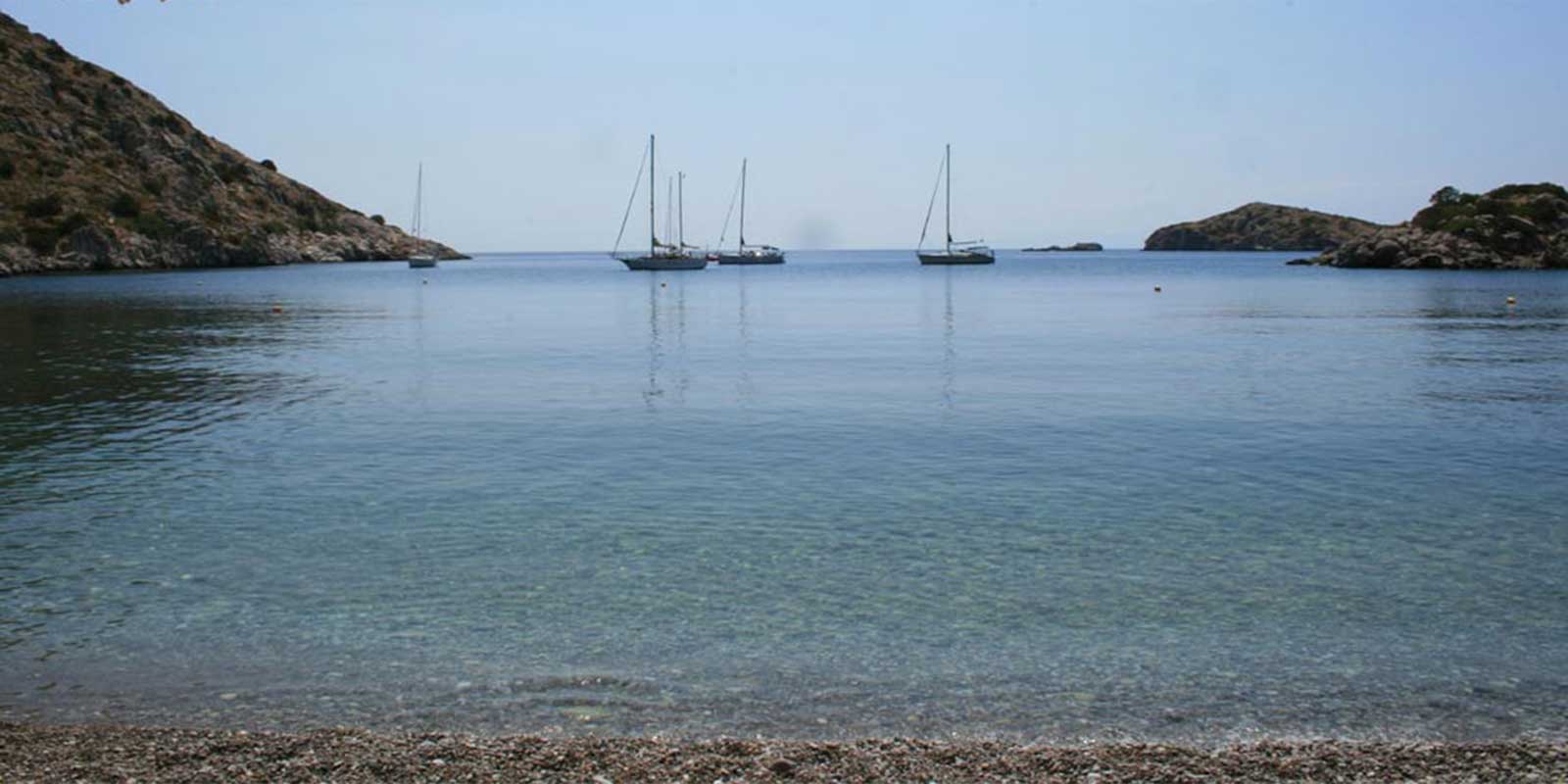 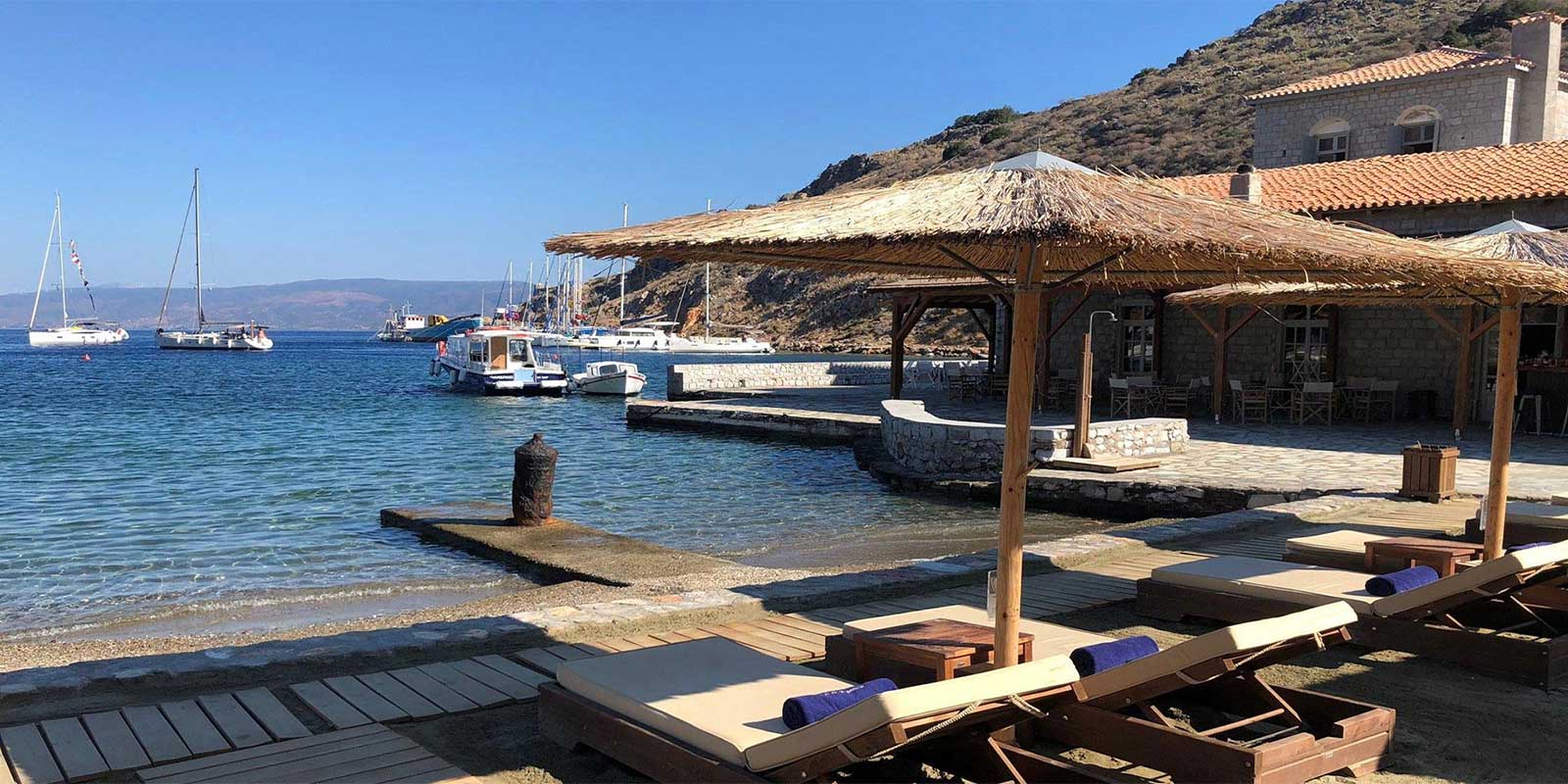 DOZENS OF DEEP BLUE BEACHES... The beautiful beaches with the grey color of the rocks and the blue of the sea, give to Hydra a natural wild beauty and make it the ideal place for inspiration and creation..

Hydra has got a lot of beaches with rocks or sand and pebbles. You have got access to them on foot, with donkeys or sea transportation means. Common characteristic of these beaches are the crystal clear blue waters.

In Spilia, in Hydroneta and Avlaki someone can go by feet, as they are just minutes away from the port of Hydra.

Close to the harbour, at the west, is a beautiful rocky area with deep blue water, called "Spilia", which is ideal for diving. Some rocks can be used for sunbathing. There is a cafe-snack there to have a cup of coffee, a drink, a light meal or a fresh juice.

Next lies Hydroneta, which is located to the most beautiful place, under the cannons and on the rocks, to the same area as Spilia. You can also deep dive here and sunbathe on the cemented rocks. There is a cafe-snack there to have a cup of coffee, a drink, a light meal or a fresh juice.

After Hydroneta there is Avlaki, one amazing small beach full of pebbles which is lighted at the night. You descend from some stairs right after Hydroneta and you meet the beach with blue green waters and sunbathe places. It is situated between the old bridge of Agia Anna and the Boudouri Manor.

Also you can go to all the above beaches with a sea taxi or tourist's boats and small boats.

Following the coastal road, 10 minutes after Avlaki, we reach Kamini, one small and natural port full of fishing boats. Right next to it, there is Small Kamini, a beautiful small pebbled beach with a beach bar-restaurant, ideal for children and sea games.

Continuing the soily coastal road, after 10 minutes, we reach the beautiful, coastal settlement of Vlychos, with magical views and magnificent sunsets, which also is ideal for family tourism. Bright white cottages and houses with spacious, full of flowers yards, are spread out and reach the hills above the beach.

One of the most beautiful and organised beaches of Hydra is the organised and picturesque beach of Vlychos with gray pebbles and crystal clear waters, suitable for young children. Nearby there are picturesque taverns with fresh fish and traditional food and refreshment shops for coffee and drinks.

After the small port of Vlychos, you will find the coastal settlement of Plakes Vlychou, a beautiful and organised beach with blue and clean waters. A few meters from the sea you will find a Hotel with a bar and a restaurant, where you can enjoy cool juices and delicious dishes.

Leaving Vlychos, after 20 min. of hiking and crossing a 17th century old bridge, we reach the coastal area of Palamida, a beautiful and sandy beach. There you will find the Manor of Voulgaris and the house that Kapoudan pasas lived. Close to the Palamida beach there is a place to repaire boats and further the remotly beach of Saint Kiprianos.

After Palamida, there is Molos, a close and quiet cove with a beatiful pebbbled beach, 70 minutes from the main port of Hydra. Here lies the old house of Xarami. During the Greek Revolution of 1821 it was a naval base for the ships of the revolutionary Hydra island.

After Molos there is Kaoumithi, a non organised beautiful beach with large sand. Next there is the beach Bali or Pigadakia, with small pebbles and an ancient sightseeing.

Bisti is a cove at the northern of the island, surrounded by tall rocks. It is an organised beach ideal for water sports, deep diving and scuba diving, next to the pine tree forest.

Next beach, close to Bisti cove, is the beautiful beach of Saint George, quiet and non organised, between two pine-clad heels. There is the small church of the named Saint.

From the northern side of the island, after the areas of Paouli and Fixthi we reach the cove of Saint Nikolaos. An organised beach eith pebbles and crystal clear waters and scuba diving. There are there sun decks and unbrellas with tables, beach bar with beverages and fast food and pine trees with shade. At some point there is also sand to play the kids. Above there is the small white Church of Agios Nikolaos and some ancient sightseeings.

Continuing and crossing the Cape of St. Constantine , just below the Gerakina Mountain , we head towards the south side of Hydra. Here we see the steep shores forming from the Zoyeri mountains until we reach St. John's cape .

Then the morphology of the area changes, the seaside landscape calms and the beautiful area of Nisiza comes out. Nisiza is a pine-covered piece of land that enters the green-blue sea and has two beautiful pebble beaches without any organization in a cove surrounded by pine trees, where it was once the seaport of the ancient settlement of Episkopi.

Next to Nisiza is the Klimaki beach , under the Eros and Pirgos Mountains, a long and pebbly beach with crystal clear waters, with several country houses and chapels (Agios Taxiarches).

After the Seal Cave, the cove "Xounda tou Riga" , the beautiful bay of Riga and the bay "Tsigari" we are on the most beautiful beach on the south coast of the island, the Limnioniza , a pebbled beach with no organization, offering for underwater fishing. Next is the less known "Karalis" beach . There are traces of the Early Helladic period on the islet on the beach of Limnioniza.

Completing the tour of the island, we pass by the steep southeast, becoming wilder and steeper with the beginning of the "Xounda Zeza . We pass through the location "Piothi" , the area "Pende volia , the Avlaki bay, the "Zogou bay and we reach the Zouvra cape.

After Zouvra we reach Mandraki, the old port, where its entrance was protected by two small cannons. In Mandraki there is a beutiful beach, the only in Hydra without pebbles. The beach is organised with water sports, beach bar and taverns. 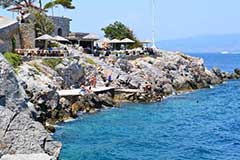 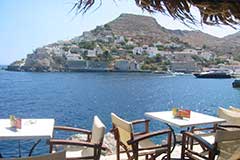 The view from the beach of Spilia 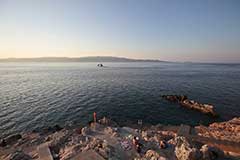 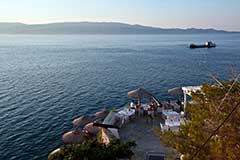 The view from Hydroneta beach 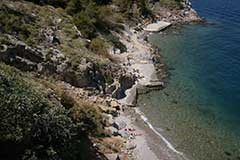 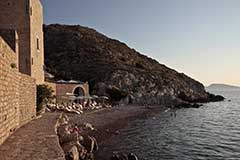 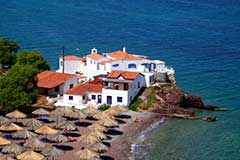 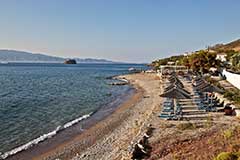 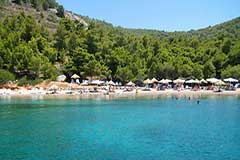 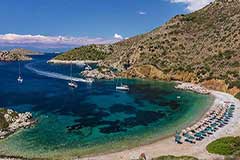 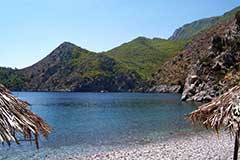 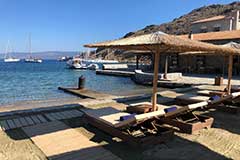